From  Saturday 7th to Sunday 15th April 2012, the America's Cup World Series Sailing Races have taken place in the Gulf of Naples.

"Public works" have been executed on Naples' Promenade and inside the Villa Comunale to host the ACWS Sailing Races. We want to make understand what these places represent for Naples and also if the interventions have respected them.

It's necessary to outline the history of these places and reporting which interventions of active protection should be put into effect. What has been recently made doesn't consider that this area is part of Naples Historic Center's  perimeter, inserted in the UNESCO «World Heritage List» (1995). Even in the «heart» of the «World Heritage» area ( «World Heritage» - 981 ha).

I was dealing with Naples' Promenade elsewhere, reporting a fundamental bibliographic reference: Giancarlo Alisio, «Il lungomare», Electa Napoli, 1989. Alisio's book proves how politicians, engineers and architects were involved in the settlement of the coast of Chiaia over the second half of the XIX century, since Gaetano Genovese that put forward the first proposal for the settlement of Naples' Promenade in 1858. They have intervened in this area during the second half of the XIX century, starting from the  «Panatica» to the beginning of the Posillipo Hill.

The «Panatica» was the building of the quarter Santa Lucia, site of the ancient military bakery of the Borbonic Age, where ship's biscuit were produced for the Real Marina of the Kingdom of the Two Sicilies.

What was realized in this area, in the second half of the XIX century is the work of Errico Alvino (Milan 1809, Rome 1872) active architect operating in Naples for almost his whole life. Alvino introduced a settlement project of the area and it was partially carried into effect.

The first stretch (the stretch of road between Santa Lucia and Piazza Vittoria) was completed in 1872. The second stretch (the stretch of road between Piazza Vittoria and Mergellina) was realized from  1872 to 1879. It took 6 years to create this last stretch, for they only worked in the summertime. The wall that coasts the sea is the work of the engineer Gaetano Bruno (Naples 1844, Naples 1909). This wall (as Alisio refers in the mentioned book) features an external covering «of pietrarsa with well connected stones and concave-profile front, according to the scheme put forward by Emy, which provided greater wave resistance». Gaetano Bruno was one of the first graduates of the school of application for the engineers of Naples with a brilliant thesis on the retaining walls, published in 1866.

Via Caracciolo is the road that runs between the sea and the Villa Comunale, which is one of Naples' historical gardens. The prototype of this urban park dates back to 1967, when the vice-king of Naples, earl of Medinacoeli, ordered to plant a double row of trees decorated by 13 fountains, to go for a walk, halfway between the trees and the sea. In1778-80 was enlarged and enriched, according to Ferdinand IV of Bourbon's will and to the work of Carlo Vanvitelli, son of the most-famous Luigi (designer of the Reggia di Caserta).

The park settlement was completed in the second half of the XIX century, thanks to Errico Alvino's project and to non-partenopean private enterprises. Among them, it is worth mentioning Anton Dohrn  (Szczecin, 1840 – Munich, 1909) devoted pupil of Charles Darwin and founder and first director of the Zoological Station of Naples, overlooking via Caracciolo. The Public works, over most of the Promenade, were executed by the Belgian financier barons Herman and Oscar Du Mesnil (which built many nineteenth-century buildings on the Promenade of Naples). Indeed - on account of the city hall of Naples - the brothers Du Mesnil realized the land reclamation that extended the city mainland from Mergellina to the current Borgo Santa Lucia, receiving the license to build on new lands. Oscar Du Mesnil came for a visit to Naples with his wife and he was so fascinated that he decided to settle down for good in there and enjoy the splendour of the Promenade.

Due to some storm surges, eftsoon via Caracciolo was completed, they begane to juxtapose bluffs, that were not much bulky at the beginning and, most of all, they were made of volcanic stone, compatible with the marine environment and with the aesthetics. In 1987 the Promenade of Naples was spoilt for the first time, widening excessively the already existing cliffs, using massives white limestones, unaesthetics and pollutants. One month ago they made the mistake to lengthen - up to 160 m – an already existing cliff instead of removing part of those inopportunely realized in 1987.

The most serious outrage has been recently perpetrated to the last work of Errico Alvino, realized 5 years after his death, in 1877. It is the «Cassa Armonica», an airy and classy building made of cast iron and glass, located in the middle of the Villa Comunale. The Cassa Armonica is a musical temple. The elegant structure stands on a high podium, it is entirely built of cast iron and glass and it represents one of the most noticeble works of the Partenopean "Liberty". The central rounded dais is surrounded by 12 cast-ironed pillars to sustain the elegant glass covering. The slender cast-ironed pillars are provided with single-cast corinthian capitals in which the rain water flows collected by a glass covering on the shapely arches. Alongside each pillar there was a cast-ironed trapezoid bolster, elegant manufactured and of  valuable “lightness” (both visually and physically) . As a result, these bolsters formed in plan-view a wide poligonal 12 sided roof (that someone called «corolla» just because of it's resemblance to the petals of a flower, it is also due to the yellow and green glasses). The crowning roof was noticeably protruding, in comparison to the central rounded dais.
The torch-holding figures alongside the access stairs are very remarkables. The «Cassa Armonica» was intended as an open-space for concerts and it was for a long time in the heart of folk musical life due to the work of the sicilian master Raffaele Caravaglios.

Inappropriate works have recently mutilated the monument, removing the crowning roof which represented the characterising element of the monument.

As you can see from many videos on youtube, the removing of the roof has been useful to allow the execution of the award ceremony, at the end of the ACWS sail races.

The dismounted parts of the important monument (which goes back 135 years) have been conserved, but anyway it's not tolerable to let the «Cassa Armonica» in the condition it currently is.

UNESCO has already expressed worries about the Historic Center of Naples and has sent a «rappel» (which is a warning memo).

I consider unavoidable that – shouldn't be restored the original shape of the important monument – the Historic Center of Naples would be inserted in the «in danger» world heritage list, which means proceding the «downgrade».

Naples' Historic city Center not only continues to deteriorate, but also very questionable public works have been carrying out, as in the case of the «Cassa Armonica» in 1877. 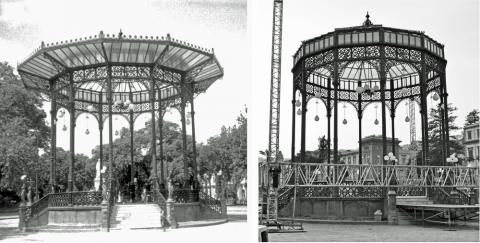