Starting from April 7th to 15th, some America's Cup World Series sailing races are planned in the Gulf of Naples.

To host the event, construction works are taking place on Naples promenade, set in the Historic City Center.

In 1995, Naples' Historic Center has been declared World Heritage Site by the UNESCO, for the following reason: «Considering that the site is of exceptional value. It is one of the most ancient cities in Europe, whose contemporary urban fabric preserves the elements of its long and eventful history Its setting on the Bay of Naples gives it an outstanding universal value which has had a profound influence in many parts of Europe and beyond.»

It has been planned to realise buildings along Via Caracciolo, on the waterfront, for the America's Cup World Series sailing races.

Via Caracciolo is situated between the sea and the Villa Comunale, which is one of the monumental parks of Naples. The prototype of the Villa Comunale has roots in 1697, when the vice-king of Naples, earl of Medinacoeli, ordered to plant a double row of trees decorated by 13 fountains along the Coast. From 1778 to 1780 the whole area was trasformed into a wonderful garden and became «royal site» according to Ferdinand IV of Bourbon's will, who assigned the project to Carlo Vanvitelli, son of the most-famous Luigi. Because of its being «royal site», the Villa (which was straight to the sea) had to be enclosed with some spots supervised by armed sentinels, which allowed the access only to the royalty.

In the middle of the Villa there's the great Cassa Armonica by Enrico Alvino (1877) made of glass and cast ironed. Enrico Alvino (1809 - 1872) is the parthenopean architect who arranged the Lungomare, realising a wall made of trachytic rock, with a parabolic profile, in order to reject the sea waves. The parapet is characterised by an unmistakable and elegant design.

Some storm surges suggested - a century ago -  the location dispersedly of small bluffs, of vesuvian rock, which did not spoil the landscape. In 1987 some massive white limestone bluffs were inappropriately leaning on the nineteenth-century wall, hiding it.

With a view to the America's Cup World Series it has been planned a 170 meters stretch of an already existing cliff, spoiling the promenade again. It is not possible to assume that this cliff could be considered provisional, demolishing it after the 2012 sailing races, and rebuilding it  again in view of the fact that further sailing races will take place also in the 2013. It's been planned the creation of a village to host the racers and also a concert starring the Colombian pop star Shakira, popular because of the "waka-waka", inside the Villa Comunale, built by Ferdinand IV of Bourbon at the end of the eighteenth century.

It's obvious the violation of the article IV of the «Convention concerning the protection of the world cultural and natural heritage» (Paris,  16 november 1972) which states that: «Each State Party to this Convention recognizes that the duty of ensuring the identification, protection, conservation, presentation and transmission to future generations of the cultural and natural heritage...».

The cultural heritage and the natural heritage are increasingly threatened with destruction not only by the traditional causes of decay, but also by changing social and economic conditions which aggravate the situation with even more formidable phenomena of damage or destruction.

That this is going to happen in one of the greatest and most interesting Historic Centers cannot be tolerated, and plus, because of its being declared «World Heritage», it should be kept under international community protection.

It is desirable an intervention of the UNESCO to prevent the harmful impact which the new buildings (planned for the America's Cup World Series races) will have on the site. This Intervention would represent the necessary input to realise a trend reversal, according to which Naples Historic Center would be respected and considered object of active protection. 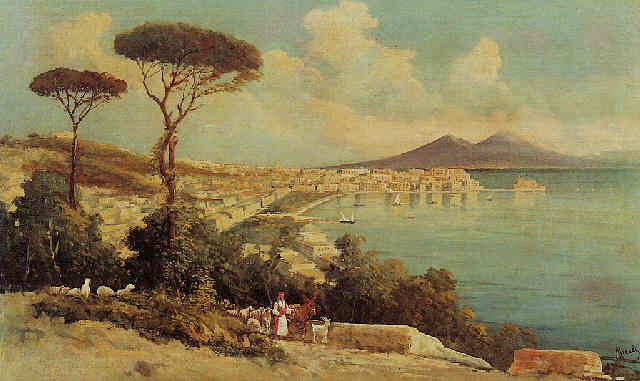